ASW 2022: The sourcing extravaganza at its very best

ASW 2022 concludes on a new high with the promise of serving the industry through more such shows. Curated on the building blocks of Opportunity, Knowledge, Inspiration and Networking, the second edition of ASW has been a massive success, giving the industry a new direction in sync with the changing dynamics.
by Apparel Resources 01-August-2022  |  18 mins read 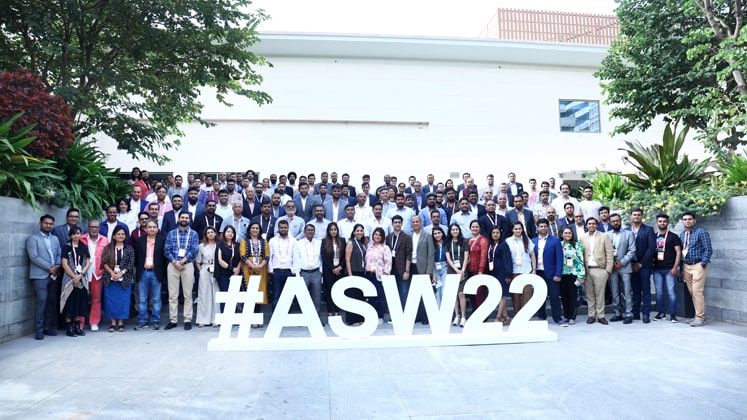 That the two-day sourcing event, held at the iconic Sheraton Grand Whitefield, would be a hit was pretty much evident early on as feelers came in thick and fast.

The sheer number of registrations and feedback of the stakeholders concerned including the exhibitors (who received tremendous business leads and enquiries at the inaugural edition of ASW, most of which translated into business later), keenly looking forward to the second edition to forge long-standing and fruitful relations with new buyers, brands and retailers, if at all, were telltale signs of what was to be expected in the two days of ASW.

Curated on the building blocks of Opportunity, Knowledge, Inspiration and Networking, little did one foresee that ASW 2022 would assume a different hue altogether to give the industry a new direction keeping with the changing dynamics.

Regional collaboration – name of the game!

Sourcing these days is not about any specific country; it’s more about a region, and what it can offer to the buyers as a whole!

Thanks to decades-long strong presence in the manufacturing hubs of Asia, especially in India and Bangladesh through its much-read print vertical of Apparel Online magazines, the organiser of ASW, Apparel Resources (AR) has been a strong propagator of putting up a regional front to reign in the opportunities on offer, which was aptly manifested in this two-day event.

The stakeholders too, holding the same views, only strengthened ASW’s resolve to take the issue of regional cooperation and identity to the next level.

“Enhanced bilateral cooperation between Bangladesh and India can go a long way in strengthening the position of both the countries in the value chain while also help establish South Asia as the hub for apparel and textile innovations,” aptly put Muhammad Imran, Bangladesh’s High Commissioner, throwing open the event, oozing confidence that ASW has the wherewithal to create the right kind of regional synergies to benefit the stakeholders concerned from both the nations.

The High Commissioner’s views were strongly seconded by Mohd. Kamaluddin, the Chairman of BGMEA Standing Committee on Trade Fair, who said Bangladesh and India can work together to garner a major share in the US $ 700 billion global MMF-based apparel market.

That India boasts of a vibrant fashion retail sector, which is set to touch US $ 88.48 billion, making it the third largest after USA and China, added a new dimension to the issue of regional collaboration.

“We strongly feel connecting with Bangladeshi suppliers is going to help us in a lot of areas as the manufacturing community in Bangladesh is comparatively advanced and we see a natural link happening with our manufacturing partners in Bangladesh,” opined Mohit Mathur, Chief Sourcing Officer at Ace Turtle, which is set to increase sourcing from Bangladesh even as it announced to establish 100 more omnichannel-enabled Lee & Wrangler stores by March 2023.

Similar were the views shared by Vasanth Kumar, Head of Sourcing and Merchandising, DaMensch Apparel, which is one of the fastest-growing start-ups in Indian fashion retail.

“Currently, we are sourcing raw material from China and Taiwan, but not the final products. As we are enhancing the product basket and adding outerwear, considering all aspects including competitive price-points, sourcing from Bangladesh is very much on the cards,” stated Vasanth.

Carefully handpicked by Team AR based on the parameters of delivery, commitment, proficiency and compliance, ASW 2022 had a rich mix of suppliers from across Asia, especially from Bangladesh and India, which meant the exceptional turnout of the buyers who visited ASW 2022 including from overseas destinations like Dubai, Australia, Hong Kong, etc., for their diverse requirements, found the right match at the two-day event.

“It was nice to come across so many different kinds of manufacturers,” underlined Dhanasekeran. R, Assistant Buying Manager of Dubai-based Lifestyle International Pvt Ltd., Landmark Group, who felt some of the Bangladeshi suppliers could afford to be little more price-competitive nevertheless.

However, the buyers from India in particular took the attention off their overseas counterparts, thanks to the diverse programmes that they had turned up with for the prospective suppliers.

As expected, orders’ queries in equally varied range were also in the mix of things.

If queries for MOQs of over 5,000 pieces delighted big names like Pacific Jeans, Indian Designs, Mahmud Group, Laguna Clothing and Adarsh Knitwear, entities like Pop Station benefited the most from visitation of emerging start-ups which wanted to source smaller quantities in the initial run.

“As we have created a flexible business model, we can accommodate almost every order size from any type of buyers,” opined Niket Lulla, CEO, Pop Station (India) adding the queries for buyers were taken care of with utmost sincerity.

Said Syed Tanvir, MD, of Chittagong-based premium denim jeans manufacturer, Pacific Jeans, “One of the leading Indian brands had discussed to start sourcing from us for the upcoming season,” while Faheem Ahamed, MD, Welstand Apparel from Dhaka was more than elated to bag decent orders from the Indian buyers during the two days of ASW.

KAS Group, which is sourcing apparels in substantial quantities from both Bangladesh and India and has lately started sourcing kid’s textile toys and pet clothing too, had a piece of advice for the vendors in both the countries.

“The demand of such products is massive in the global retail market; they (vendors) need to actively look at these products categories,” advised Arjun Puri, Director of KAS Group Asia.

Knowledge sharing and networking opportunities – icing on the cake

It’s not just hardcore business, like the inaugural edition, ASW 2022 had an equally power-packed line up of industry-focused seminars, ideative sessions, bridging talks, open houses and endless networking opportunities including the invite-only networking night, which witnessed the who’s who of the industry letting their hair down over a drink or two and share some light-hearted moments at the comedy show presented by famous stand-up artiste Atul Khatri!

The 15-plus knowledge sessions conducted and participated by more than 65 well-heeled industry experts in their respective domains to deliberate on issues pertaining to the future of fashion, upcycling and sustainability, D2C opportunities in fashion, mitigating the risks in sourcing, etc., were not just informative but also shed new light on the various emerging aspects pertaining to the issues concerned.

“In today’s context, when everything is changing very fast in light of the pandemic and the existing market dynamics, the forum of ASW is a great place to facilitate meaningful dialogue,” observed Neetu Jotwani, SVP, House of brands, Myntra, who has been a part of couple of very exciting panel discussions, which was echoed equally strongly by Suparna Malhotra, Vice President of the Newtimes Group of Companies.

Amidst all the hectic business discussions and closing of business deals, the second edition of ASW took time out to acknowledge, salute and celebrate the unparalleled success of the women leaders of the industry through the AR SHERO Awards.

To put it in a sentence, ASW ’22 ticked all the boxes that one could perceive off, making it one-of-its-kind platform that not only facilitates business, but also addresses all conceivable issues pertaining to manufacturing, fashion and retail.

“ASW is creating newer opportunities for the world’s biggest brands to do business and meet new partners, ensuring the sharpest innovators hit the stage,” stated Mayank Mohindra, the proud CEO of ASW, promising to be back soon with more such endeavours to help the industry scale new heights.

ASW in a nutshell