Haute Couture Week 2020: How fashion is evolving during COVID-19 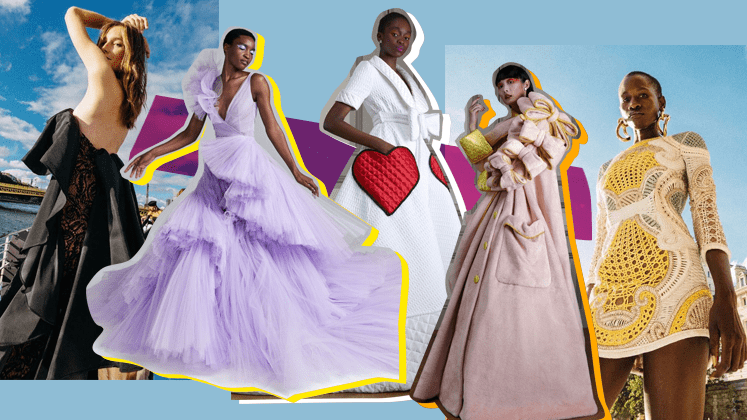 The year 2020 has brought with it a disruption in the way the fashion industry operates, forcing the industry to rethink its ways of designing collections, how the multi-season collection format is now obsolete, as well as converting runaway shows into digital experiences.

Following the same, Fédération de la Haute Couture et de la Mode took a step forward and decided to schedule the Haute Couture Week Autumn-Winter 20-21 edition digitally. Via an array of inventive and varied digital presentations, the entire world witnessed equally and first-hand the first-ever edition of Haute Couture Week — a sight usually limited to the who’s who of the fashion world.

There has been a lot of creativity as well as the lack of it — ranging from teaser clips to mini-movies, to exclusive and socially distanced phygital shows to sketches and lookbooks — every couture house had its own take on the digital format in a way that makes one wonder what the future of fashion could look like.

Spotlighting the top 7 digital presentations of Haute Couture Week Fall Winter 2020 edition that stood out for their approach, techniques and details, and fashion trend directions for the coming season… In this unprecedented period still marked by confinement, Maria Grazia Chiuri designed Dior’s Autumn-Winter 2020-2021 Haute Couture collection that is inspired, in part, from Théâtre de la mode (a roving exhibition of styles by French couturiers that traveled between Europe and America to raise funds for war survivors and to help revive the French fashion industry in the aftermath of WWII). For this, the house produced 37 miniature couture silhouettes, embodying the quintessence of the excellence prevalent in the Dior Ateliers. Reawakening enchantment, six of these looks have been created in life-size versions.

Working on a small scale not only offers the opportunity for the House’s craftsmen to re-embrace and elaborate on precious and time-taking techniques, such as embroidery and hand-pleating to the nearest millimetre, but also to transpose the essentials of tailoring on doll-size mannequins that measure precisely 55 centimetres high. Produced entirely by hand, the folds dressing these miniatures celebrate the beauty of the creative gesture, which is the essence of couture.

Ever since Chiuri’s appointment at the helm of Dior, there has been a feminine touch to the house’s aesthetics. Continuing the culture this season as well, Dior credited five surrealist women artists at the heart of its inspirations for the season – Lee Miller, Dorothea Tanning, Leonora Carrington, Dora Maar and Jacqueline Lamba.

These artists, who transcended the role of ‘muses’, lend to the collection a different kind of femininity— one that is imbued with the attitude that we are connected, attuned to nature and transformation.

The film was supported by each garment being individually pictured in the form of a lookbook. If Viktor & Rolf’s Autumn-Winter 2020 collection had to be described in one sentence, it would be — ‘Socially distanced couture that mimics the many emotions experienced during COVID-19’. The designer duo presented three mini wardrobes comprising a negligee, dressing gown and coat meant to represent pandemic-related emotional states.The collection was communicated via a short film titled ‘Change’, which takes the form of a traditional show in a couture salon, with the singer Mika providing a voiceover in the style of a retro British newscaster from the 50s. The collection comes alive with details that highlight meme-worthy lace-incrusted patchwork emojis, sparkly spikes, a halo of hearts and large heart shaped pockets that send out a message of hope and how people need to be more loving and kinder towards one another during this period of uncertainty. “The subject is the emotional rollercoaster that we all experienced and are experiencing,” said Rolf Snoeren, adding, “We are discussing a little bit mental health and how to dress for your emotions, as well to say that all emotions are valid and necessary.”

A collection, created out of all in-house available fabric stock, points towards the various sustainable measures the brand has been taking for fabric sourcing. Regarded as one of the most innovative designers of the century, Japanese designer Yuima Nakazato is known for implementing new technologies within his couture collections. His Autumn-Winter 2020 Haute Couture collection focuses on a special digital project that aims at establishing a personal bond with his clientele abroad.

Depicted through a video, the digital presentation introduces the concept of ‘Face-to-Face’, an online made-to-order programme that shows Nakazato interacting with his clients as they narrate their interests, life experiences and memories, while Nakazato designs clothes for them, based on these stories.

25 white shirts are utilised in this experiment, serving as blank canvases that challenge the designer to create brand-new garments in real-time.

In a world where physical interactions have been replaced with virtual conversations, the collection represents Nakazato’s eagerness to reach out to reconnect with the world, exploiting his creative vision to examine new sustainable practices as well as making haute couture accessible to everyone. Juxtaposing the real with the digital in the actual sense, we saw Ralph & Russo adapting to a new way of couture — not only limited to making clothes, but presenting them as well. The label summoned an AI developer from South Korea to develop an avatar named Hauli, which in Swahili, evokes strength and power.

For their Autumn-Winter 20-21 Haute Couture collection, Ralph & Russo quoted its inspiration to the Seven Wonders of the World, travel, art and architecture. The label produced eight garments from the collection pieces and implemented AI to develop eight others. Voluminous, floor-grazing gowns highlighted with embellishments, feathers and tulle came forth in a colour palette dominant of pastel tones. Feminine ruffles, layering techniques, drapes and bejewelled details stood out. Flowers formed a consistent theme in the collection, featuring as embroidery, prints or hair accessories. “Digitising florals to develop prints and re-embroidering them is just as laborious in the virtual world,” Ralph said over a Zoom message. Dressed in couture, Hauli appears in the last few shots of the video, poised against some of the Seven Wonders of the World, including Petra, Taj Mahal and the Great Wall of China. Since COVID-19 presents the fashion world with the grave challenge of producing physical collections, Hauli hints towards the future of fashion, urging designers to stimulate their creativity and embrace new technologies in order to cater to clients’ needs. Balmain took over the Seine as its runway (how very French of it!) for its Haute Couture Autumn-Winter 2020 showcase. The presentation transcended beyond the confines of a digital fashion week by making the show available for locals to witness as it happened. Around 20,000 locals who were strolling by the river caught at least a glimpse of the show in motion.

The 2-hour extravaganza was set to livestream on TikTok, marking a first for Balmain and for the video platform, which had never worked with a luxury brand before. It was a brilliant idea, even though it was cut short midway due to technical glitches and one that allowed the brand to acquire 15,000 new followers on the platform. The showcase included 13 pieces by the Balmain’s founding couturier and his successors Eric Mortensen and Oscar de la Renta, in addition to almost as many from Olivier’s first decade at the house.

In his notes for the collection, Olivier expressed a longing to return to real-life presentations. “It’s really hard to just do digital without any physical experience; we are all missing it,” he said. “We work for an audience, and you lose the emotion if you don’t have one. We need to go back to that.” Ahead of her presentation in January, Dutch designer Iris Van Herpen, who is known to marry technological nuances with nature and artisanal craftsmanship with innovation in design, chose to develop only one look as part of her Haute Couture Autumn-Winter 20-21 showcase. Titled ‘Transmotion’, a 1-minute-long film presented Herpen’s couture piece — a geometrical dress following symmetry in both its axis and without context.

Starring Game of Thrones actress Carice Van Houten, the video shows a diaphanous white dress in silk organza featuring translucent layers of plisse pleats constructed to resemble petals that reveal crystalline filaments sprouting from the heart of the dress. Black branches of duchess satin were laser-cut, hand-stitched and formed the central roots of the garment, and black coloured crystals signifying seeds punctuated the tip of each stamen-like strand. Motion and fluidity involved in the formation of tessellations highlighted our capacity to shift between negatives and positives. Schiaparelli opted for a unique yet unusual video that depicted behind-the-scenes shots of its Creative Director, Daniel Roseberry sitting in Washington Square Park and bringing the collection alive via sketches. The film aims to highlight how we are all in this together — by showcasing the simple experience of sitting in a park to introspect, create or unwind during the tumultuous time the world is going through.

“Everything has changed, but imagination and the drive to create have never been more relevant, or more profound. This collection is a tribute to that impulse to create. It’s also why the world of Schiaparelli has never felt more reflective of our time. Elsa’s commitment to the surreal, her fascination with inverting our everyday reality, has never been timelier. This collection is full of tributes to her work and her obsessions, done in my way, on new terms,” said Daniel. The sketches are dominant of structured silhouettes, feminine décolletés and delicate shapes in a colour palette dominant of reds, pinks and blues, reminiscent of Maison’s surrealistic aesthetic.

Designers and brands are moving fast to devise digital solutions to support their creativity.

The pandemic has highlighted how the concept of multiple seasons is confusing and wasteful not only for the industry but for the consumers as well, especially in a day and age where global audience is used to a constant stream of information, experiences and branded content relating to a commercial offering.

While it’s time for adoption and adaption of a digital revolution, the new digital version of fashion weeks can benefit from borrowing some tried and tested ideas from its counterpart — some lessons on keeping the suspense alive and to maintain its ‘wow’ factor will surely aid the process.

Lotus Veda: Heritage in every thread

Sneha Arora: A label that emphasises on exclusivity